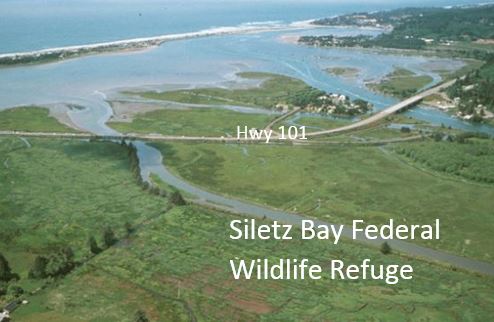 Guides from the U.S. Fish and Wildlife Service will lead kayakers on free tours of thet National Wildlife Refuges through August, promising paddlers glimpses of seldom-seen landscapes and wildlife.

The two-hour trips will snake through the hearts of the protected Siletz Bay National Wildlife Refuge  with interpreters recalling the natural history and pointing out wildlife. The Siletz Bay, just south of Lincoln City, paddlers will loop around the refuge, through tidal marsh, riparian forest, and along the Siletz River.

Schedule:  No free tours because of virus

Tours are limited in size and scheduled on a first-come-first-serve basis; therefore, advanced reservations are required.  Learn about the Siletz Bay National Wildlife Refuge and how it was established to return this salt marsh to its natural state.  Living nearby is abundant bird life such as the Great Egret and lucky paddlers will see Red-tailed Hawks and Bald Eagles watchfully perched on sun-bleached snags. You might enjoy a sighting of the Great Blue Heron stalking its prey by patiently standing still and then swiftly nabbing a passing fish with speed and grace.

The Refuge representing some of the most photogenic habitat along the Pacific Coast Scenic Byway, Siletz Bay National Wildlife Refuge was formerly pastureland, diked against the tides to accommodate dairy cows. Shallow open waters, salt marsh, mudflats, sandy beaches, seagrass beds, and sheltered channels form the complex tapestry of habitats characteristic of estuaries, where rivers meet and mingle with the sea. Though protected from the full force of the ocean’s pounding waves and buffeting winds, estuarine plants and animals must deal with the rigors of exposure, submersion, and fluctuation in salinity with each tidal cycle.

he best entrance to the  Siletz Bay National Wildlife Refuge is the stream on the left of the movie house, which is 1/2 mile up the river, 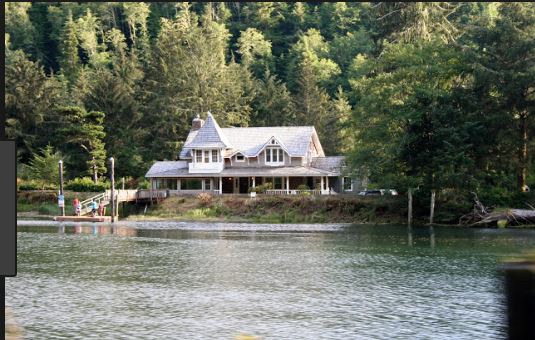 as you face the house.

is nearly falling into the river.  Like their lives in general, living there is a continual struggle against encroachment — water, the jungle of Oregon forests, the weather.  It is separated from the rest of the community, situated across a river, and only accessible by boat.  That house, the heart/guts of the family, is crucial to the story.

When the film crew got to Oregon to film the movie, they couldn’t find just the right existing house to place the Stampers in, so they built one.  If you’ve seen the movie or read the book, you know that the house is meant to have been there for generations.  In both the book and the movie, Hank and the other Stampers are constantly shoring things up, trying to keep the house/household standing.

After the filming was complete, because it was a film set, a temporary structure, the plan was to torch the house.  1970 was an unusually hot/dry summer, however, and the county wouldn’t give a permit for the fire so the filmmakers sold the house.

Amazingly — demonstrating what seems to be the ultimate in “shoring up” (adding a foundation, cleaning up the movie debris, painting, etc.) — the house has been owned and lived in over the past 40 years.  Located about a half a mile up the Siletz River Highway, It is now available for sale or as a short-term vacation rental.

Established in 1991, the purpose of this refuge is to protect and enhance estuarine fish and wildlife resources and their habitats.  Encompassing 568 acres, Siletz Bay features salt marsh, brackish marsh, tidal sloughs, mudflats, and coniferous and deciduous forestland. The refuge provides nursery grounds for Coho and Chinook Salmon, Steelhead and Cutthroat Trout, and other anadromous species. The primary ecological goal for the refuge is to allow the salt marsh to return to its natural state of twice-daily tidal inundation.

A small tidal marsh restoration project was completed by the Refuge in November 2000. In the fall of 2003, another project restored 86 acres of tidal marsh at Millport Slough through a partnership with Ducks Unlimited and the Confederated Tribes of the Siletz Indians. The restoration involved breaching 220 feet of a dike, removing two dikes totaling 9,300 feet, and filling 1,200 feet of artificial ditches. Large woody debris was placed in the marsh to improve habitat for anadromous fish.

Visitor activities at the refuge include hiking the Alder Island Nature Trail, paddling in the bay and tidal sloughs. Padding through the refuge is best at high time. Tide table are @ http://www.hightide.fun Bank fishing in the fall for salmon or hunting waterfowl seasonally in designated areas.

Birds, Animals, Reptiles, Amphibians, and Fish you may see in the Refuge depend on the time of year.

During the summer Mallard, Wood Duck, and merganser parents trail trains of fuzzy ducklings behind them. Ospreys hover and dive on their day-long fishing forays, nabbing meals for their hungry and growing broods.

Returning Brown Pelicans, so graceful on the wing, make crashing spectacles of themselves when they spot forage fish swimming below. They tuck their wings, stretch their necks, and simply let gravity take its course. They’re a summer delight, and their numbers are increasing along Oregon’s Siletz Refuge.

Birds of Prey … Hunters from on high, birds of prey come in many shapes and sizes and lifestyles, unified in their proclivity to living off the flesh of others. Several species frequent Oregon’s coast and estuaries, including the fish-eating Osprey and the dive-bombing Peregrine Falcon.  … Click Here More about the Birds of Prey

Mammals … An assortment of mammals large and small find sanctuary in Siletz Bay NWR’s varied habitats. Elk, deer, otters, and rodents are regular sights here; more elusive are predators such as Bobcat, Coyote and even Black Bear … Click Here More about the Mammals

Waterfowl … The mix of freshwater, saltwater and brackish estuary at Siletz Bay NWR draws multitudes of ducks and geese each year, as well as waders and divers including herons, grebes, pelicans, and cormorants …. Click Here More about the Waterfowl

Songbirds … Siletz Bay NWR is home to dozens of so-called songbirds, ranging in size from the pennyweight kinglet to the comparatively huge, croaking raven; and ranging inhabit from the high-diving kingfisher to the hovering, nectar-sipping hummingbird …
Click Here More about the Songbirds 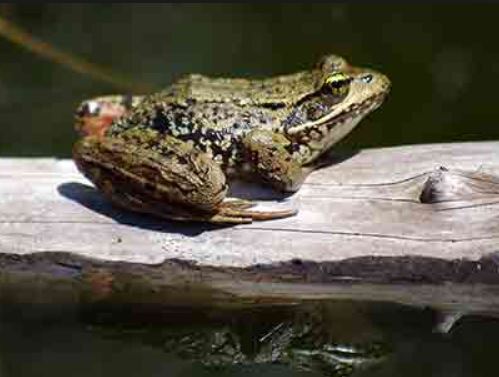 Siletz Bay Refuge habitat abounds with frogs, newts, and snakes straddle the boundary between land and water; below the surface, fishes such as salmon and sole spend their larval stages in estuaries before heading out to sea … Click Here More about the Reptiles, Amphibians and Fish

This entry was posted on July 7, 2019 by Kayak Rentals & Sustainable Living.